Whether or not you’re a Minecraft fan or a Total Miner fan, many gamers out there enjoy the Xbox Indie block-builder FortressCraft. FC has become the top-selling Xbox Live Indie Game of all time with an estimated sales value of over a million dollars, making it an official Indie sensation. While it doesn’t hold up to Minecraft’s success and enjoyable gameplay, FortressCraft does have it’s fair share of elements that have contributed to the title’s huge success, mainly the social interactivity that is offered in the voxel block-builder.

Just to be clear so that some gamers aren’t confused, the new update is for FortressCraft Chapter 1. This is not a new chapter, just a patch for the original first version of the game. 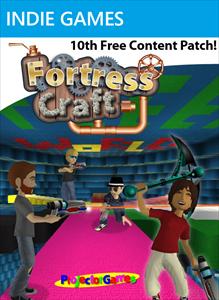 FortressCraft’s new v1.1 update was released on Monday October 18th, 2011 and adds a variety of new features including:

The first downloadable patch update for FortressCraft is a whopping 81.93 MB, which is pretty much the size of most Indie titles altogether. Below is a FC v1.1 YouTube video taken right from the official channel, and is pretty much the only official Projector Games video I could find with footage of the update.

FortressCraft offers a social gaming experience to be enjoyed with friends over Xbox LIVE, but it offers no real gameplay with no quests or objectives. Instead, think of FortressCraft like a virtual LEGO experiment where you can build anything you like, if you have the time. While I personally enjoy games that have a point to them, many gamers out there have had a blast with this Xbox Live Indie title, and it’s less of an actual game rather than a voxel-styled block builder that makes use of Avatars.

For more information on FortressCraft please visit the official website. FortressCraft is currently available on the Xbox Live Indie Games Marketplace for 240 MSP ($3).

One Response to FortressCraft v1.1 Released