T.E.C. 3001 from Pheonix Game Studio is an interesting Xbox Indie that was featured as a finalist in this year’s Indie Games Summer Uprising event. While few titles on the XBLIG Marketplace compare to T.E.C. 3001’s awesome 3-D graphics, I have to say that this isn’t my type of game. This particular title is a racing game where players command a bipedal robot who’s only goal is to collect batteries and run across a variety of challenging tracks.

You are a TEC 3001, aka a Tesla Energy Collector model 3001, and your only goal in life is to collect remnants of energy in the form of supercharged atomic batteries that were left behind by the ill-fated humankind. To collect all the fusion batteries TEC must face impossible odds with the extremely dangerous trials that lay before him. Will he succeed in collecting the energy cells needed to prolong his life, or will he fail and suffer the same fate as his creators?

While many gamers out there like the fast-paced action that T.E.C. brings, I personally find it frustrating at times as the high speeds can literally work against you. The increasing difficulty of the tracks makes it so players have to either be well versed in hand-eye coordination or memorize the level from a dozen or so tries. 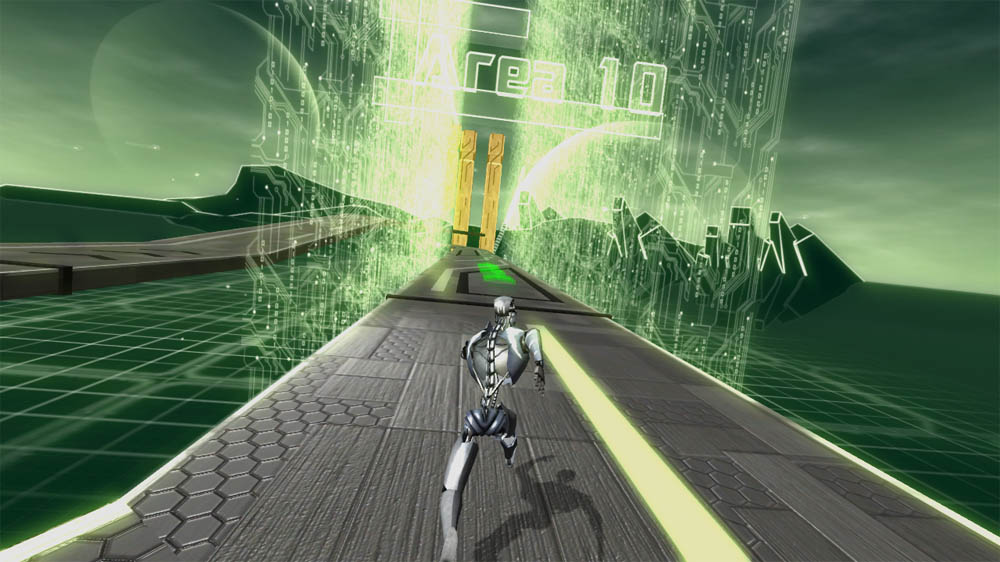 The game mechanics featured in this Xbox Indie are unique in that it’s really the first game of it’s kind in the entire marketplace. No other XBLIG release offers the third-person racing experience, and to many gamers this game represents something unique and groundbreaking.

Our robot’s object is quite simple: it must collect a required amount of batteries in order to pass to the next stage, assuming players make it that far. This game requires a good amount of patience and a great deal of heightened reflexes, and is a fantastic way to test hand-eye coordination…yet no matter how good you are, you’re going to die…and die, and die some more.

Thankfully T.E.C. 3001 gives players unlimited continues–and trust me, unless you’re a pro at these types of games, you’re going to need every single one of them. This is a game that requires true skill, and isn’t recommended for the casual gamer. If you’re the type of player who wants to beat every game you play, then T.E.C. 3001 may keep you busy for a while.

Another addition to the game that helps players a good deal is the checkpoint system, which acts as your savior quite often. Trust me, when you’re jumping and flying across the levels at a speed that would make Sonic the Hedgehog seem lethargic, you’re going to beg for those giant transparent checkpoint walls. These checkpoints serve an essential function as players will respawn at that point rather than having to restart all the way over again. Up until you reach your first checkpoint, though, you’ll have to start from the beginning. Throughout gameplay there are a myriad of structures and objects that affect the game in various ways. Our rallying robot will run across green arrow pads set into the track which increase speed, as well as green boxes that instantly boost to max speed. These take some care, however, as you can easily run off the edge–and there are no barriers to keep you in-line, so watch out.

TEC can perform a variety of in-game abilities; it’s not just your average run and jump game. Our metal runner can jump with the A button, and tap it twice to double-jump–which is a nice addition that helps out quite often. The dash ability is used by pressing RT, and is necessary to break through the glass barriers. And lastly, the robot can slide by pressing B. Any stage requires any number of these abilities to be performed, and players must know the exact times to slide, jump, and dash in order to make it through intact.

The in-game HUD interface is pretty nice and gives players the sense of looking through the eyes of a high-tech machine. On-screen indicators help players pinpoint the location of batteries and how to best collect them, and there is also a digital readout in the bottom left-hand corner of the screen that displays the current speed. On the bottom right-hand is the battery count that displays how many batteries players have. 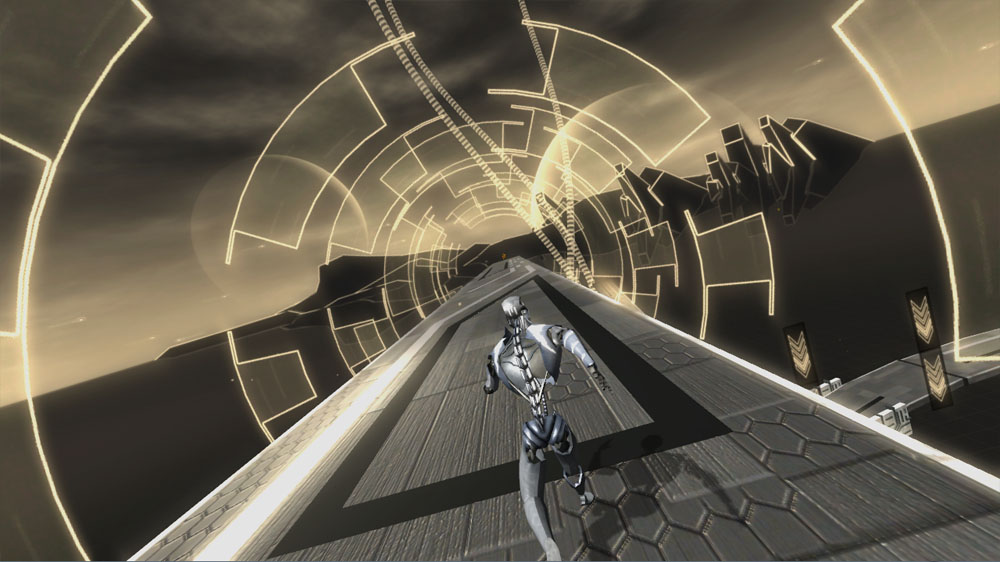 While T.E.C. 3001 has a few frustrating features, there are also a variety of unique elements that make this a must-play Indie. The superior graphics and amazing visuals are quite impressive, making the game take on a high-tech sci-fi feel. The atmosphere is enjoyable as well as the tracks themselves take place in another world, one of brilliance and neon lights that are somewhat akin to the style of Tron. There are also glimpses of celestial bodies and planetside vistas that offer breathtaking views.

Along with the high-end graphics, T.E.C. 3001 also makes use of  innovative and cutting-edge game dynamics. It’s unique gameplay concepts that puts players at the control of a technologically advanced robot that must rally across a wide variety of stages and tracks is unprecedented in the Xbox Indies Marketplace. The use of original gameplay elements make it one of the most creative titles on the marketplace today. 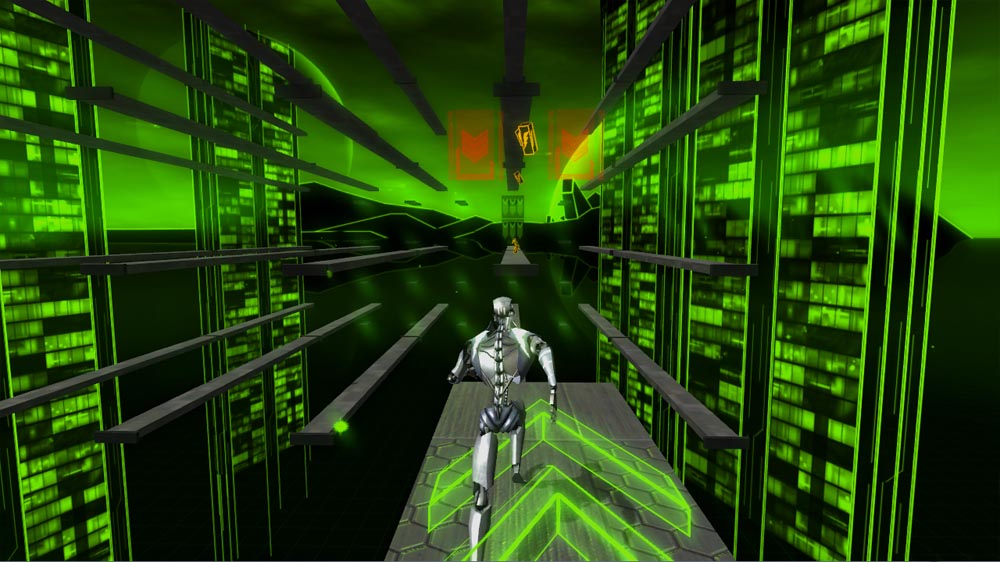 Personally I found T.E.C. 3001 to be too difficult for my tastes. Players who want to master it will need to be highly skilled or very patient as the tracks are trying and challenging, and they only get harder as players progress. T.E.C. 3001 isn’t for everyone, and if you’re the type of gamer who is skilled at games where timing is everything, then you’re going to love this one. Phoenix Game Studio delivers an imaginative and visually impressive title with this XBLIG release. After all, it is quite satisfying to leap and bound across the levels as well as travel at extreme speeds giving the sense of pure exhilaration…that is until you fly off the edge and have to restart.

For more information on T.E.C. 3001 please visit the official website.