If you walked into a coin-op arcade in the early 1990s chances are you’d see someone playing SEGA Bass Fishing and comically yanking around the controller. The whole gameplay experience was an event in itself: yanking back on the fishing pole controller and reeling in the line was something that made you look quite silly, however it was one of the signature elements of the game’s enjoyability.

Taking away the controller rods and replacing it with an everyday Xbox 360 controller takes a good chunk out of the game itself. It’s just not the same without the click of the reel and how gamers had to actually yank the pole around to fight the raging bass as it pulled on the line. It was an interactive event all in itself and it accounted for a good slice of why gamers enjoyed it so much, even after dumping fistfuls of quarters into the machine.

Despite the loss of the beloved interactive controllers, this XBLA port does live up to the classic original in its general gameplay dynamics. It mirrors and reflects its predecessor both graphically and mechanically, featuring the same Dreamcast-style 3-D environments and reflexive controls. Gamers use both strategy and keen hand-eye coordination to catch bass, and it takes patience and diligence to wrangle these tough aquatic vertebrates. 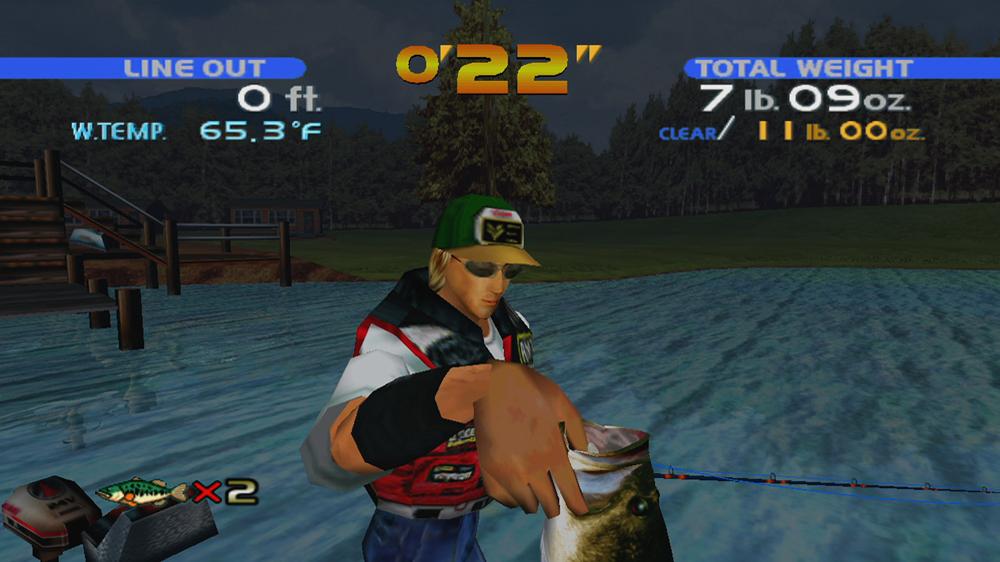 While the time limit makes gamers feel quite rushed, as in the Arcade Mode players only get two minutes for each playthrough, the game balances itself out by giving unlimited continues that allow another round of angling action. Every second counts in SEGA Bass Fishing. The classic arcade version offered a small taste with each two minute round, and to move on to other stages it was up to gamers to either be bass masters, be very lucky, or pump quarters into the machine in order to keep playing.

The Original Mode offers a tournament-styled circuit where players compete against other fisherman in a battle of poles and lures to catch the biggest and heaviest of them all: the coveted Super Bass. In this mode players will take on stages that become progressively more difficult and challenging, and often gamers will have to utilize a variety of different lures to attract bass as they can be quite stubborn in the later stages.

To do well on either game mode it’s advised that players invest a good half-hour in the Practice Mode, which is the closest that SEGA Bass Fishing comes to the real-life sport. In Practice Mode players have no designated time limit or goals: you’re simply trying to learn the ropes and see which lures are useful in which situations. Making good use of experimenting with each different type of lure can be the difference between baiting a huge bass or a dinky one-pounder.

One of the main reasons that this game isn’t as enjoyable as the classic arcade version is the jerky movement controls that are hard to get used to. As each lure has its own unique characteristics and elements, it’s sometimes hard to get the lures and the lines to respond in the correct way. This can be frustrating as players can often lose those heavy bass they’ve been fighting with for a dozen seconds or so. These controls seem to fit the fishing rod controllers in the arcades–but not on a standard Xbox 360 controller.

The Achievements themselves are difficult to unlock as most of them require gamers to invest a considerable amount of time into the game. This XBLA title also features Awards, but they literally require a total of 10 hours of play time to unlock: after five hours an avatar shirt for SEGA Bass Fishing unlocks and at 10 hours a fishing rod avatar prop becomes available.

While the arcade version of the cult classic SEGA Bass Fishing was more popular and all-around enjoyable, this Xbox LIVE Arcade port does well to deliver the signature fast-paced and challenging bass fishing experience for gamers to enjoy in their own home. With a variety of stages and lures taken right from the original, the console version brings the standard hook and reel gameplay while also incorporating a tournament mode where players compete for the biggest basses.

SEGA Bass Fishing adapts the early ’90s classic into a compact version that truly puts gamers’ fishing mastery to the test. With the on-screen indicators players must hone their reflexes and have a keen eye to watch the line strength to make sure it doesn’t snap, however the jerky controls and consistently annoying time counter mar the relaxing and time-consuming sport.