With the plethora of free mods and user-created add-ons available for the PC version of Fallout: New Vegas, the Gun Runner’s Arsenal and Courier’s Stash add-ons aren’t entirely necessary. Tech-saavy gamers who would rather not have to go through the trouble of installing additional software like FOOK 2 (FallOut Overhaul Kit) and NVSE (New Vegas Script Extender) will definitely enjoy these DLC packs and the myriad of additional weaponry included.

For those of us who know how to run FOMM (FallOut Mod Manager) and the G.E.C.K. (Garden of Eden Creation Kit) probably won’t find these two packs very useful, however. There are plenty of mods available on website communities like the Fallout 3 Nexus that allow gamers to download and play user-created content–yet sometimes it can be frustrating when mods have conflicts and bugs to make the game crash.

That being said, the Xbox 360 version offers a very different, non-moddable “vanilla” Fallout: New Vegas experience which both the Gun Runner’s Arsenal and Courier’s Stash are quite helpful–especially for players who have activated the Hardcore mode. Console gamers will generally find much more benefit to the DLC packs than PC gamers.

“The famous weapons manufacturer, Gun Runners, has opened up their exclusive cache of armaments, including new weapons, weapon mods, ammo types and recipes. Their inventory doesn’t come without a price, though. Trek far and wide throughout the Mojave Wasteland in search of this elite class of weapons that range from the outrageously potent to the bizarrely impractical.“

The Gun Runners’ Stash opens up a wide variety of new and powerful weaponry to the wasteland world of New Vegas. From enhanced weaponry like a snazzy katana (it might be a Hattori Hanzo blade) to unique weapons like the insanely powerful nuke-launching Esther. How do you tell the DLC weapons apart from the normal ones? Well the powerful Gun Runner-grade items appear with [GRA] at end to distinguish them from the everyday run-of-the-mill firearms.

These high quality and versatile weapons come at a high price, however, and you can’t kill the shop owners and steal their wares. Gamers who have the PC version of New Vegas won’t have to worry about caps, as the console commands make earning bottle caps as easy as entering a one-line command…yet gamers who have the Xbox 360 version must make their purchases wisely.

All of the weapons included in the Gun Runners’ Arsenal DLC pack can be upgraded and modified just like normal weaponry, and the GRA pack even includes unique mods to add to the high-grade arsenal (NOTE: unique weapons cannot be modified). Items included in this add-on are distinguished from normal weapons by having [GRA] at the end.

To buy the new weapons be sure to check every merchant and retailer that sells weapons: from the Gun Runners outside of New Vegas itself to the merchant inside of the dinosaur at Novac and everywhere in between. To own them all you’ll have to scour the entire wasteland and check every merchant’s inventory, and have a huge overflowing bank of bottle caps.

All weapon types and sizes are covered in the GRA pack, including energy weapons, regular firearms (pistols, shotguns, bolt-action rifles, sniper rifles, etc.), and even melee weapons like baseball bats and chainsaws. Some of the more notable weapons included in this pack are the MF Hyperbreeder Alpha (which has unlimited ammo and has an explosive finishing move), the Nuka Breaker (a makeshift weapon crafted from a Nuka Cola sign),  the Sprtel-Wood 9700 (a super-powerful gatling laser that annihilates just about everything) and last but not least, the extremely versatile Bozar (a rapid-fire scoped carbine rifle that holds thirty shots per clip).

Along with all of these other features and items, this DLC pack also includes new challenges and achievements/trophies for gamers to unlock, most of which include buying/using the weapons bought in the add-on.

“Wake up in the Mojave Wasteland with an edge. Courier’s Stash gives players immediate access to four content bundles previously available only through pre-ordering Fallout: New Vegas. The Caravan Pack, Classic Pack, Mercenary Pack and Tribal Pack each offer unique weapons, apparel and aid advantages that will help you throughout your journey.“

Again, the bonus items included in Courier’s Stash aren’t really that necessary for PC gamers who make use of an extensive library of Fallout: New Vegas mods. While these items can be useful in many ways if you’re playing the vanilla version, there are many user-created mods and add-ons that are much more useful.

Personally I find the Courier’s Stash add-on extremely helpful for console gamers who have just started their game, as they get a multitude of items right off the bat. The only downside is the weight issue, and at the start of the game players might not have enough space to carry all the goodies they find strewn throughout the wasteland.

Courier’s Stash gives gamers all the bonus items that were only available through Pre-Ordering Fallout: New Vegas at select retailers. The items are broken up into four mini-packs known as the Caravan Pack, the Mercenary Pack, the Tribal Pack, and the Classic Pack.

Unlike the Gun Runners’ Arsenal pack, the items in this DLC add-on are automatically added to your inventory. Check below for a thorough list of the weapons, armors, and additional useful utilities included in this particular DLC pack:

PC gamers who are familiar with the console command system would be able to acquire all these items by typing in the correct item ID codes…obviously console gamers don’t have this luxury and are forced to use their wits (and time) to amass items.

Overall, both the Gun Runners’ Arsenal and Courier’s Stash DLC packs are pretty essential to console gamers, but they aren’t anything special to PC gamers who make use of mods. Both of the packs together offer a helping hand to console gamers, and the Courier’s Stash supplements a fresh playthrough quite nicely. These DLC’s are affordable and if you’re the type of gamer who wants more firepower and unique weapons, then I’d say stick with the Gun Runners’ Arsenal as it has an impressive array of new weaponry even when compared to some mods out there…yet you’ll have to shell out a small fortune in bottle caps to collect them all. 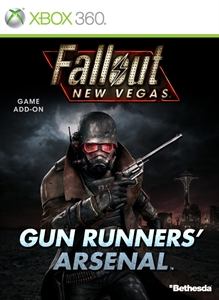 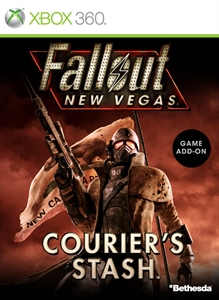 Click each picture to be linked to the corresponding page on Xbox Live and to purchase each DLC add-on.
[nggallery id=554]