The Binding of Isaac PC Review 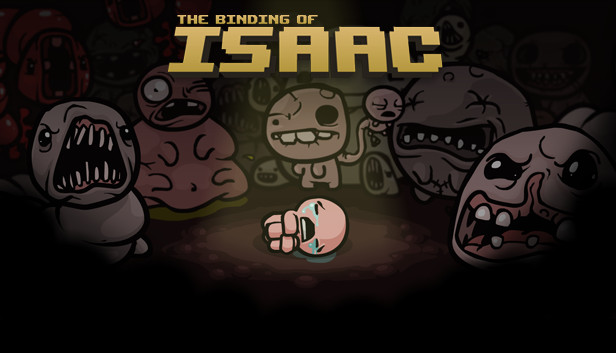 Isaac is a happy kid who’s had a normal and ordinary childhood, raised by his religious mother in a cozy home on a hill. One day his mother hears the mighty voice of God who proclaims her son’s soul is corrupt and must be cleansed. In the same way that God spoke to Abraham, the Lord asks Isaac’s mother to sacrifice her son to prove her holy dedication. Being the pious and zealous follower she is, the once-loving mother agrees to give her son’s life to God…yet Isaac overhears her plan and trembles in fear. Scrambling around in a panic, Isaac notices a trap door leading to the basement, and quickly jumps down into the unknown depths to escape his crazed mother.

Soon Isaac realizes that his plight has only just begun as he’s not alone in the darkness–dozens of untold horrors lay await within the shadowy depths, waiting to eat him alive.

The Binding of Isaac is an action RPG shooter with roguelike mechanics, featuring a unique and disturbing visual style with multiple gameplay features that make it an unforgettable and enjoyable experience. From the intense tear-throwing combat action to McMillen’s hilarious signature visual style, this game is fun on many different levels and provides gamers with a new experience with every playthrough.

The dark themes and bizarre visual style may be frightening to some, yet their cartoonish portrayal coupled with hilarious in-game visuals–such as the basic design of Isaac being a smiley head with stick arms–lighten the gory and macabre elements, making it more acceptable.

This particular PC Indie plays quite similar to Zelda with it’s control scheme, yet the shooter mechanics make gamers feel as if they’re playing an arcade title of sorts. Rather than using a firearm or slingshot, our frightened boy hero makes use of his tears as weapons, as he’s always crying in fear. That concept alone brings a humorous and crafty level of creativity to the game, being one of the many zany features within the title.

Normally in a game in this genre players will have a certain pool of extra lives, and when those are used up sometimes we’ll get a continue option–or even a password. This game doesn’t have any of that, adding the true sense that Isaac’s journey is an epic adventure full of trials and hardships. When players get lose all their hearts from getting hit, poor Isaac’s is done for.

When you restart in most games, the core of the game remains the same: the same NPC’s, enemies, quests, items, etc. The Binding of Isaac turns that concept on it’s head with a new experience every time you replay the game–and believe me, unless you’re a guru at these types of games, you’re going to get used to restarting. Every room, powerup, enemy, and boss is randomized, giving a fresh new way to enjoy the game.

I’ve often learned that sometimes the key to beating bosses and game progression can be largely dependent on what powerups and weapons you find. Since the placement of all items is randomized, sometimes players will get lucky and find powerful enhancements that won’t be there the second time around. Players can have a weapon powerup as well as a secondary weapon that’s used by pressing the space bar.

Combine the powerups and secondary weapons with the all-purpose bombs and tarot cards that give you a one-time use special attack (use these by pressing Q), Isaac is now a formidable badass that gives gamers a decent advantage against bosses. One item called the Unicorn’s Horn, for example, is like the star from Super Mario Bros. that makes players temporarily invincible, making just about any boss battle much easier.

If anything, the level of difficulty makes The Binding of Isaac akin to a classic arcade title: while it can be frustrating at times, the frustration fuels your desire for revenge and keeps you coming back for more. Players not only have to make use of their reflex skills in dodging hordes of enemies and their projectile attacks, but also have to learn to strategically make use of the environment around them and get used to omni-directional shooting paths.

Along with these challenges, the game is somewhat unforgiving in it’s lack of health replenishing hearts which are crucial to survival. Since every item drop–including the chests and slot machines–is fully randomized, players may find hearts when they don’t need them and find something else when they do. Other times you’ll get lucky and find extra hearts and bombs and maybe even a shiny nickle (but make sure you bite it to make sure it’s real).

The wide array of powerups will aid players throughout their adventures in the hallowed basement depths. There are over a hundred different items that not only upgrade Isaac’s attacks but also change his visual appearance. Most of these enhancements are hilariously cruel in various ways; the wire coathanger, for example, is jammed through Isaac’s head and makes his attacks stronger as he’s crying even harder than usual. These attack upgrades stack on each other, so eventually Isaac will look pretty disturbing with coathangers, lit bomb fuses, and even possessed bloody eyeballs.

With over fifty different horrifying enemies in the game, Isaac has his work cut out for him if he ever wants to see the light of day again. From mutated worms to mutated lumps that belch out flies, each enemy has their own signature attacks and movement patterns to study. Certain enemies also require different strategies to defeat, especially the ones that fire projectiles everywhere.

To me, the epic boss battles are the most enjoyable part of the game. If you thought the regular demonic entities and horrors were scary, then the bosses are the stuff of nightmares. There’s Monstro, the blob that bounces across the screen and belches blood everywhere; Larry Jr., a segmented worm creature that moves in a pattern akin to the classic arcade title Centipede; and Genesis (my personal favorite) who has a deformed fetus conjoined to it’s head. All in all there are over twenty bosses, each having their own strategies and unique attacks that make the battles into challenging epic struggles.

The Binding of Isaac brings back the classic gaming sensibilities that fans of old-school NES titles will enjoy. With non-stop action, Isaac must defeat dozens of enemies in a dark and disturbing landscape full of monstrosities and horrors. The most enjoyable elements of the game come with the title’s visual style: only Team Meat’s Edmund McMillen can recreate such a harrowing and hilariously fun tale with his signature cartoonish flair. The game reminds me of a twisted cartoon that you’d find on Adult Swim, and it plays like a bizarro version of Zelda with it’s layout, environments, and interfaces.

While the game is challenging, I find it only makes the game even more enjoyable as gamers reflex skills are put to the test. Reminiscent of NES-style difficulty, The Binding of Isaac is a title that’s meant to be played over and over, and each time it offers a whole new experience. This is definitely a must-have for fans of McMillen’s plethora of Indie titles.

For more information on The Binding of Isaac please visit the game’s official Steam page.