Whilst celebrating the capture of ‘Splosion Man, the crazy maniacal lab experiment gone wrong, Big Science unwittingly creates another experiment with an accidental spill. Ms. ‘Splosion Man materializes in all of her pink glory, instantly sploding and turning all the nearby scientists to dust. She means well, no really–it’s not her fault she’s an explosive killing machine! Use this wacky female version in the sequel to Twisted Pixel’s ‘Splosion Man series and wreak havoc and mayhem on Big Science and the rest of the high tech world.

This game is amiable, hilarious and outright fun in many ways–whether it’s the signature zany style that Twisted Pixel utilizes in their games, or the characteristics of the feisty and lovable heroine herself, gamers are sure to enjoy this Xbox Live Arcade sequel. Run through a myriad of over 50 stages spanning a few worlds, each with their own increasingly challenging levels. Ms. Splosion Man redefines fast-paced platformer action with an emphasis on timing, focus, and downright insanity.

Wherever Ms. ‘Splosion Man goes, destruction follows in her wake. Yet her cartoonish and animated femininity makes her hard to hate–no matter how many scientists and flying ships she destroys.

The mechanics of this game are quite simple–scroll to the right and splode to navigate over, under, and sometimes through obstacles. The farther players get in the game the more elaborate and difficult the stages get, and some of them become downright cruel. Gamers must use their focus skills and time their splodes perfectly at times or risk failure. With the variety of strategies needed to figure out how to beat each stage the game takes on a sort of trial-and-error and puzzler feel, yet most of the time the paths are obvious. 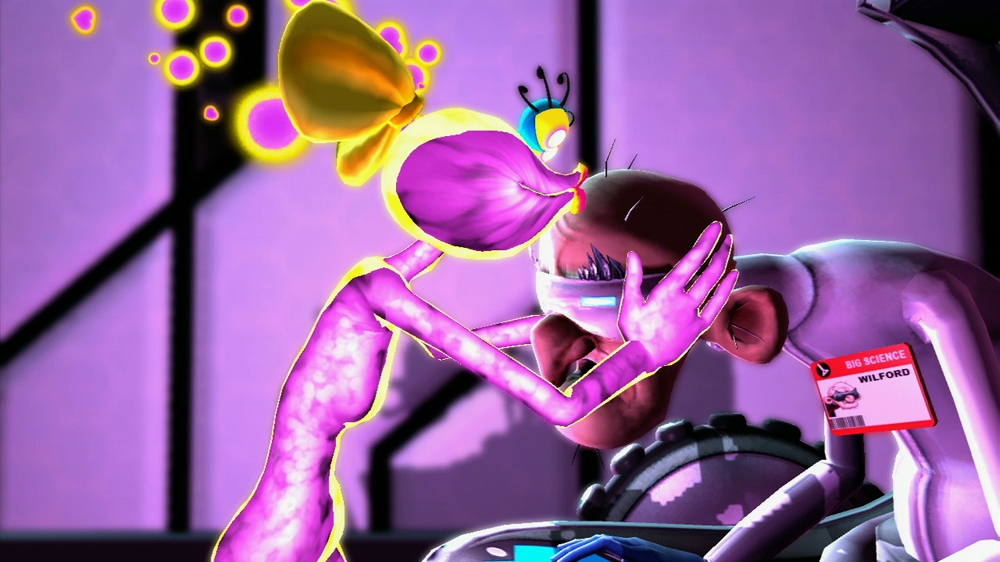 Ms. ‘Splosion Man is a platformer at heart, one that has nonstop action from start to finish, and it only gets more heated as the game goes on. Every level has it’s own design and style and they are consistent yet varied, making every stage different in terms of gameplay. Players get to ‘splode three times while in the air, and the only way to refresh this count is to either touch the ground, a platform, a wall, or an explosive barrel. The better players do in each stage and the more points they earn the more coins they’ll be rewarded. Use this currency to buy content in the mall, from videos to pictures and concept art.

Precision and timing is everything in this game, and often players will have to look before they leap or die and die over and over. Basically you have to watch the screen as it scrolls and constantly be aware of what’s going on, yet the classic platformer action is sure to have most gamers on their toes as well as enjoying themselves in this next-gen evolution of a side-scroller.

Ms. ‘Splosion Man also features massive bosses battles that are quite entertaining and hilarious. Usually the bosses themselves have multiple scenarios in which players must strategically use the environment–exploding barrels, etc–around them to attack and defeat the boss’s weak points. Even in the face of a gigantic mechanoid our zany femme fatale laughs and smooches, eager to be as crazy as possible and thoroughly enjoy herself.

There are a few unique features that make Ms. ‘Splosion Man a memorable Xbox Live Arcade title. These features include the pink heroine’s loveable and crazy character traits, the cartoonish wackiness of Twisted Pixel’s releases, and the awesome music tracks that are just as crazy as the game itself. Additionally there are the multitude of bonus game modes like 2Girls1Controller as well as local and online multiplayer.

Few characters are as crazy and batty as our pink nuclear lady friend, and she knows it. Lunacy and sploding are her specialties, yet there is a method to her madness–although she’s lethal and unstable she wants to smooch nearly everyone she sees. This characteristic is hilarious as it is amiable and it brings a new level of wackiness to the series itself. This title reflects Twisted Pixel’s signature cartoonish zany elements seen in nearly all of their games, and is, of course, powered by beard.

Twisted Pixel Games strikes again with the sequel to their original release, ‘Splosion Man, offering a new and refreshing take on Big Science experiments gone wrong. Ms. ‘Splosion Man retains all the original aspects of the first release and improves on them with a new host of stages and worlds each with their own styles and themes. ‘Splode all across the city and labs of Big Science while spreading pandemonium and mayhem all over. While the game can be somewhat trying and difficult at times, it’s definitely a great title that any gamer can play to both laugh and be entertained with side-scrolling action.