Warning: A non-numeric value encountered in /var/www/vhosts/gamingtruth.com/httpdocs/wp-content/themes/gonzo-child-theme/single.php on line 51

Warning: A non-numeric value encountered in /var/www/vhosts/gamingtruth.com/httpdocs/wp-content/themes/gonzo-child-theme/single.php on line 52

Warning: A non-numeric value encountered in /var/www/vhosts/gamingtruth.com/httpdocs/wp-content/themes/gonzo-child-theme/single.php on line 53

Warning: A non-numeric value encountered in /var/www/vhosts/gamingtruth.com/httpdocs/wp-content/themes/gonzo-child-theme/single.php on line 54

Warning: A non-numeric value encountered in /var/www/vhosts/gamingtruth.com/httpdocs/wp-content/themes/gonzo-child-theme/single.php on line 55

Warning: A non-numeric value encountered in /var/www/vhosts/gamingtruth.com/httpdocs/wp-content/themes/gonzo-child-theme/single.php on line 56

Warning: A non-numeric value encountered in /var/www/vhosts/gamingtruth.com/httpdocs/wp-content/themes/gonzo-child-theme/single.php on line 57

Akane, our central heroine in this title, is a powerful Kunoichi ninja who’s skills are unparalleled. Our femme fatale has only one weakness: her love for Master Goro, a noble samurai warrior who’s honor and prestige bring him many women’s favor.

One fateful day Master Goro is kidnapped by the malicious villain Hiromi, taken from Akane and their homeland. The young Kunoichi warrior tried to stop Hiromi’s minions, yet she was disarmed and her beloved samurai love was snatched up.

Akane vows to save her one true love from Hiromi’s clutches, an adventure fit for a true Kunoichi ninja. Our heroine will face many trials that test both her acrobatic and fighting skills–plowing through hordes of enemies and taking down towering bosses to move onwards and save the samurai Goro.

Akane the Kunoichi utilizes familiar side-scrolling platforming mechanics that are signature to titles such as the early Shinobi and Ninja Gaiden games. Players utilize the Kunoichi’s graceful acrobatic skills to cling and slide down walls, jump over obstacles and gaps, and the deadly throwing knives that are the signature weapon to our ninja warrior-ess.

Players will have to navigate through maze-like stages that become progressively more dynamic as they get farther in the game, each chapter lasting for three stages. The stage start-up screen is akin to Sonic games in it’s design and style, and like Sonic, gamers will make heavy use of jumping and dodging enemy attacks.

The controls in this game are very easy to use and are limited as the game doesn’t have an expansive control interface. As this title possesses traditional platformer gameplay elements, there’s really no need to use every button on the controller.

The HUD interface is quite simplistic: a health meter straight out of the early Zelda games with red hearts on the upper left hand side, the Spell Scroll interface on the bottom left-hand side, a counter in the upper right displaying how many hidden kimonos players have found in that level, and finally a time counter in the upper middle of the screen. Players are timed for each stage, but there are powerups scattered throughout the game that add bonuses to the countdown.

Enemies in this game are somewhat like the stages: the farther players get, the harder the game gets. Sometimes players will have to face multiple waves of enemies that instantly spawn in front (and behind) of them. This adds a certain challenge and brings a traditional arcade-style mechanic that tests player’s mettle and reflex skills.

Get ready to spam X over and over till your finger blisters!

There are enemies that shoot out flaming knives–the orange ninjas–and ones that just stand around. The enemies in black with little Raiden hats take them off and fling them at our Kunoichi ninja, yet if they’re killed, the flaming hat becomes useless and doesn’t harm Akane. Players will have to make use of both offensive and evasive maneuvers while playing this game, jumping and dodging enemy attacks to retaliate with their own. 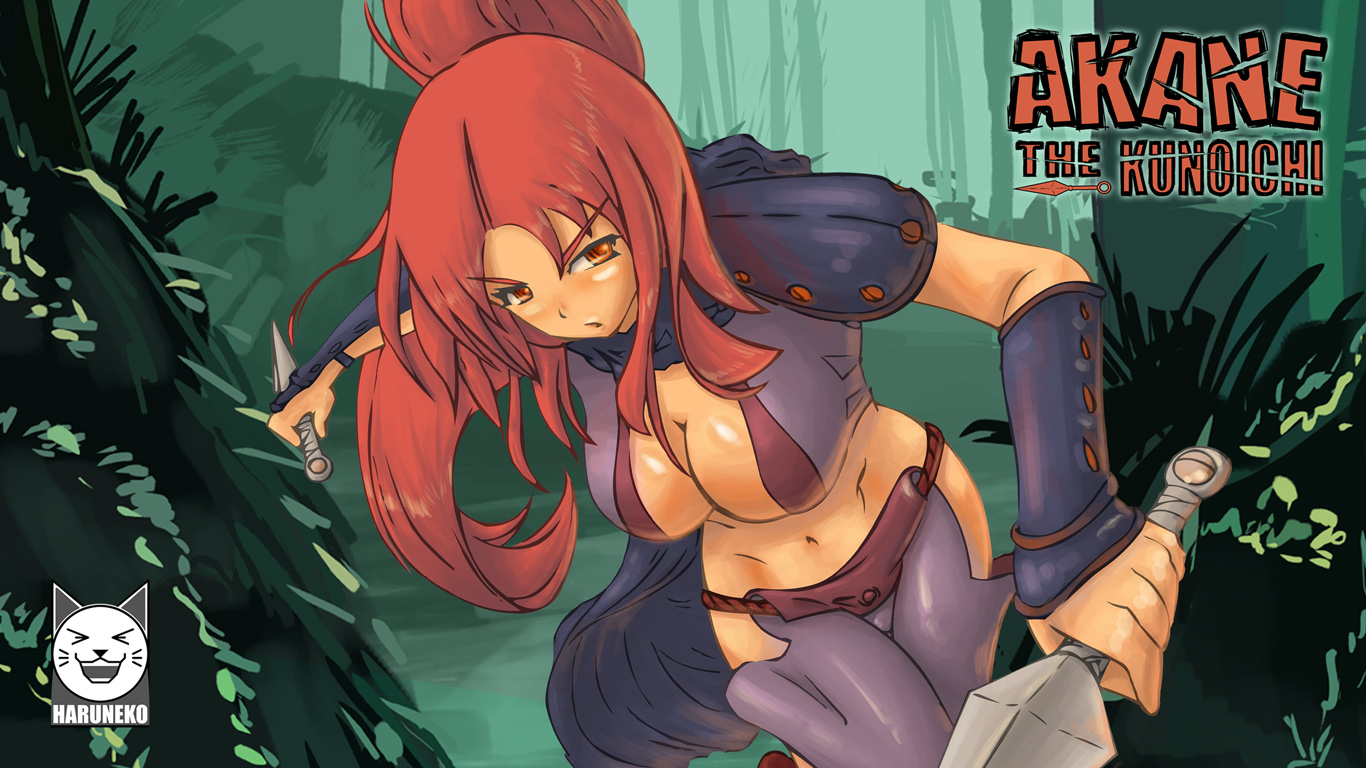 There are multiple powerups to collect in this game, all of which are hidden in white glass kitty head-things…yes I know how that sounds, but when you break them, they sound like glass. Anyway, bust open these containers to find goodies here and there, some of which–like POW–can add upgrades to Akane’s normal X attack, making each press shoot out more knives.

Time bonus powerups are also found throughout the game, as are Hearts that replenish one health piece. These Heart pieces are precious as players can only get hit a maximum of four times in the game or risk a game over.

This impressive action platformer possesses a few unique features such as the three spell scroll abilities that annihilate most on-screen enemies (excluding bosses), the engaging and challenging boss battles, and the seven different unlockable Trophics which are much like the Awardments found in XBLIG titles.

With the three different scroll abilities, players can ensure victory in most cases as these spells are powerful and decimate nearly every enemy on the screen–so long as they are hit by the attack. The three abilities each of their own effect: one spell fires and outward ring of knives that flies in all directions, the next raining knives down from above in a vertical path, and the final ability shoots a line of knives in a horizontal direction. These spells can be the difference between life and death in many cases, and can save players when they’re in a tight spot.

Boss battles in Akane the Kunoichi are great, as they reflect a sense of nostalgia to older console platformers. Every boss is massive and gigantic, each with their own weak spots and vulnerable areas. Every boss takes a different strategy to defeat, making every battle challenging yet satisfying when they reign victorious. The special abilities are very useful when fighting bosses, as they can deal a large chunk of damage.

The seven unlockable Trophies in this Xbox Indie title add a sense of achievement when beating the game, and they are also reminiscent to Awardments found in many XBLIG releases.

The Final Truth: Akane the Kunoichi is an enjoyable Xbox Indie side-scrolling action platformer that offers multiple hours of play time, boss battles on every ending stage, over fifteen stages with five different themes that engage gamers and test their reflexes. The game delivers an experience that’s much like old arcade-style action platformers where players must use both evasive and offensive combat measures. Overall the title was an awesome Xbox Live Indie Game and provided a new quality of gameplay that isn’t usually found in these independent releases.

For more information on Akane The Kunoichi and the XNA Development team that created it, Haruneko Games, please visit their official website or Follow them on Twitter for instant updates.