Published on May 2nd, 2011 | by Derek Strickland, Contributor

From the development studio that brought us the recreational drinking game Beer Pong, the educational language titles Spanish 101 & German 101 comes a new Xbox Indie focused on simulating a computer “hacking” experience.  Hack This Game by Utopioneer Games is a somewhat confusing puzzle & trivia game that focuses on logic and reasoning skills.

Hack This Game can be confusing at first, however gamers must be persistant to learn how to “hack” into worldwide computer mainframes. Basically the game makes use of a trial-and-error system of logging in and then using wits to solve puzzles that unlock each encrypted file. Players figure out the file’s Login Code by utilizing a combination of the four face buttons on the X360 controller: A, X, B, and Y.

When players input the random Login sequence XXYBB, for example, the mainframe may give back something like this:

This translates to the first two digits being correct in the sequence, XX, and YB being incorrect, and the last digit B being correct. Confusing? Just a tad, yet once players are logged in they won’t have to re-log in once again. Moving on to solving the first File and unlocking it’s virtual goodies to go to the next is basically the flow of this game. Each locked folder adds a new and unique sequence for players to solve and at every fifth file gamers must beat the Tracer game.

The Help menu doesn’t offer explicit help, yet it gives the basic instruction in playing the game. It’d be nice if it had more details and specifics, yet it appears that the developers wanted gamers to utilize logic in order to solve the puzzles. The devs offer hints on their website for frustrated gamers who can’t figure out the puzzles in an effort to ease the difficulty.

A few unique features that this game implements is the main user interface–it is a ghostly lime green that gives players the sense that they’re on an older-style computer mainframe. There are five window panes: /Terminal, /Debug, /Location, /Loading, and /Input, each with their own function and dynamics within the game. 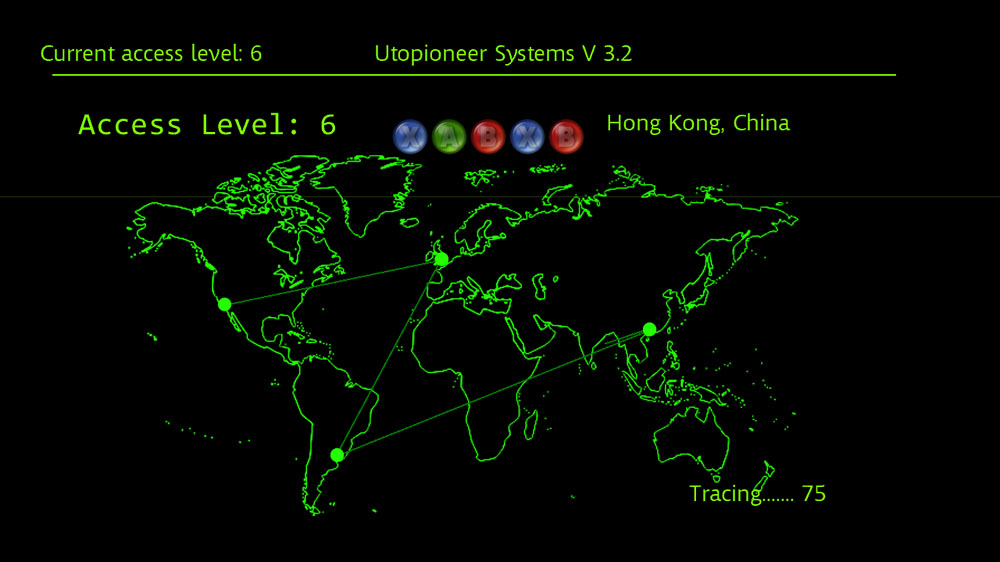 The Tracer mini-game simulates a hacker’s evasion of being traced on the network. Players must input the correct sequence of face buttons (A,B,X,Y) as quickly as possible before the time runs out in order to dodge the IP Trace. If players are too slow their IP’s are identified and Access to the next File is denied. This Tracer mini-game features many different cities in foreign countries all across the globe in a world map illuminated in that same ghostly lime green.

Entertaining puzzles, sequences, and alphanumeric patterns are all unique features in Hack This Game that provide for a challenging and original gaming experience. This hacking simulator makes use of random small puzzles for each File, some of them quite confusing and take some calculation or studying to solve.

Hack This Game has a unique concept, being an original puzzler in many ways. Players are rewarded for having memorization skills and logic skills to figure out the trial-and-error password Login code and to solve the puzzles for each file that is locked. Also the Tracer mini-game is an excellent addition to this title that tests a player’s dexterity and focus skills.

The game is certainly different in it’s style, design, and overall gameplay mechanics and can be enjoyed by gamers who enjoy brain-teasers and number puzzles. Although it’s difficult for most, there are surely some players out there who have mastered their hacking skills and have dedicated their efforts in solving the myriad of puzzles, each File offering a new challenge.

Hack This Game is a truly unique puzzle game with elements of computer network hacking simulation. Although it’s can be frustrating to most players–I can honestly see many gamers out there being perplexed at first but then ultimately figuring it out and enjoying it. It’s a challenging title but it’s not impossible and it utilizes interesting gameplay elements and concepts as well as testing player’s wits and reflexes in an original blend of hacking-sim and puzzler.

– Tailored to an Acquired Taste

For more information on Hack This Game and the development studio that created it, Utopioneer Games, visit their homesite.