The Tempura of the Dead Xbox Indie Review

Tempura of the Dead was developed by 8Bit Fanatics–a Japanese game studio–and this side-scrolling platformer is one of the many titles responsible for redefining the way the gaming community views Xbox Indies. Hack and slash zombies with Sugimoto’s katana, or fire a fusillade of bullets at the undead hordes using President Bar … I mean Thompson’s machine gun–either way the game is great and sure to please.

This title combines many familiar aspects of gaming together in one small, fried and tasty package that has gamers coming back for more. Whether it’s the classic bit-style graphics that bring players back to early NES days, or the exhilarating action that focuses on reflexes and dexterity, players are sure to savor the crispy goodness that is the Tempura of the Dead.

In the year 201X AD The story arc follows that of the standard zombie apocalypse and the entire United States is overrun by these harrowing ghouls. The U.S. President (who bears a striking resemblance to a certain commander-in-chief  currently in office) has lost control of the situation, and America has fallen in lethal duress.

Thompson, being a resilient and charismatic leader, refuses to give up hope even when staring in the eyes by death himself. While on a flight in a government helicopter over what once was his country, President Thompson notices a samurai warrior that is defending civilians from the zombies. Thompson decides his fate is to join the samurai hero and fight the evil minions head-on to reclaim his homeland. 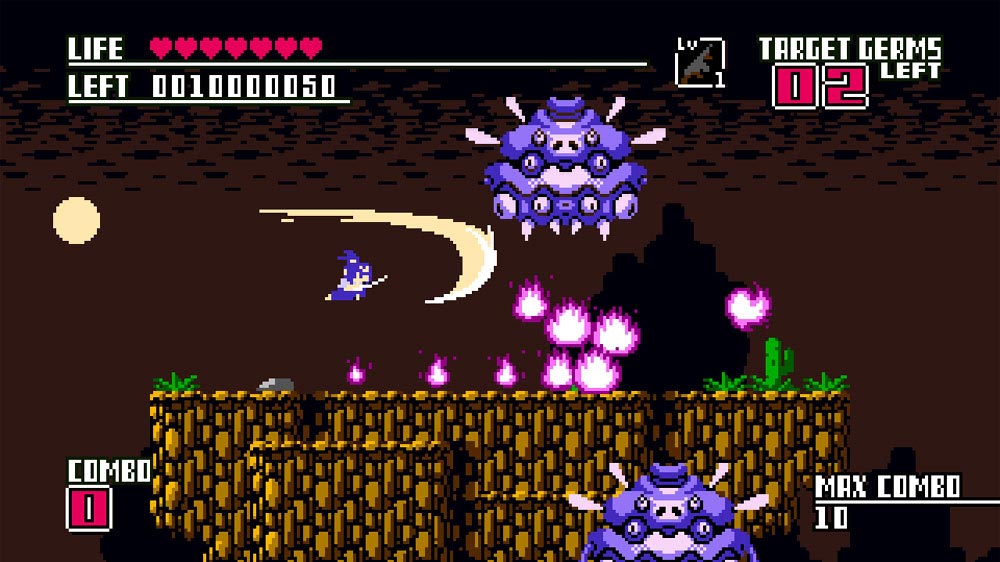 Tempura of the Dead offers a unique experience but also delivers a classic vintage style that both die-hard and casual gamers can recognize and appreciate.

The controls are easy to use and are very fluid in function and placement. Players may switch back and forth between Sugimoto or President Thompson, and each character has their own traits and attributes–the samurai has stronger short-range attacks and can jump higher, and Thompson has weaker, rapid projectile attacks. Using a combination of each of the two party members is essential and allows players to customize their own play-style and strategies.

The general dynamics of hearts acting as traditional health are utilized in this game, and each heart represents one hit from any enemy. Objectives in this Indie platformer are quite simple–to eliminate all the “Germs of Calamity”, which are these monstrous creatures ranging from many different forms. There is also an array of items to be purchased from Shopmaster Zom–a friendly zombie who bargains to our heroic duo.

Although this title has classic aspects like side-scrolling 2D action to entertain players, it also has a few features that set it apart from  other Xbox Indies. If you look closely on the main title screen you may notice “Zombie Head Jugglers” written there; pretty odd, huh? Well basically after a player kills a zombie their head can be bounced in the air. If a player bounces the zombies head three times, the zombie’s soul will be salvaged in the form of fried tempura. This zany feature only adds to the signature style of the 8Bits Fanatics game library.

Tempura Fever is activated when players successfully juggle zombie heads and harvest their soul: this feature is tied in with the “Left” bar below the Life meter on the HUD which represents how many lives or continues a player has.

Looking at the bar you may notice that its possible to get a huge amount of lives. Each bonus continue is earned by juggling the zombie heads and salvaging their soul, and while Tempura Fever is activated, only one successful head-juggle is required to unlock the extra continue. This rewards players who are skillful in reflexes and can keep a “Max Combo” going as long as possible.

Since the levels aren’t completed until a player destroys all the “Germs”, and the zombies constantly re-spawn over and over, it’s possible to rack up quite a considerable amount of continues and extra lives by simply grinding out Tempura Fever numerous times.

Tempura of the Dead is an action-packed and highly enjoyable 2D side-scrolling Xbox Indie that die-hard geeks and gamers will be enthralled with. Even though it was released in November of 2010, the game is still popular and highly acclaimed even today.

Remaining one of the truly classic renditions of vintage early 8-bit-style gaming in the Xbox Indies marketplace, Tempura of the Dead is an excellent choice for gamers who want a nostalgic experience for an affordable price.

One Response to The Tempura of the Dead Xbox Indie Review