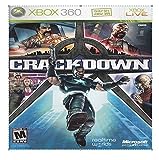 If you’re as interested in Crackdown as I am, you’ll be pleased to know that the demo hits Xbox Live in January…

On January 18, 2007, battle your way through the roads and rooftops of Crackdownâ„¢ as the explosive demo lands on Xbox LiveÂ® Marketplace. For the ultimate payback, combine forces in online co-op play for twice the thrills and double the retribution Gold membership needed for online multiplayer.

This makes history simply because not many games outside of Dead Rising have figured out that having a demo available before your game lanches have seen the joys of what that pre-launch publicity can do for a title if the demo is awesome.

Here’s hoping Crackdown continues this “Awesome demo, sell a ton of copies” record, because i’m definitely looking forward to this one.

Crackdown on Crime this February [via Xbox.com]

Deejay Knight, Editor/Founder Deejay has been a gamer since the Atari 2600, has wrestled–and defeated–alligators with only his toes, and once aligned all the planets in the Solar System by uttering the words "Coo Coo Ka-Choo". In his sleep. He currently bides his time behind the scenes here at GAMINGtruth.com, streaming at http://www.twitch.tv/deejayknight and teaching.

7 Responses to Crackdown Demo to Hit XBL in January