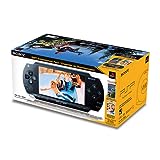 Not to be outdone by iTunes, Sony has announced a video download service that’s compatible with the PSP.

Sony is to gatecrash the fledgling market in handheld devices to play downloaded video content early next year when it launches a service for the PlayStation Portable.

The decision, which could threaten Apple Computerâ€™s grip on the video download market, will allow PSP owners to download a film from the internet to a PC and then to transfer a single, legal version of the film to a Sony device.

Sony, which has sold more than 20m PSPs worldwide, expects to launch the service in the first quarter of 2007 after tying up deals with online video providers.

This has to be great news for PSP owners that have to convert their videos into a compatible format to get them working properly with the handheld.

Something that’s a definite plus is the screen on the PSP as compared to an iPod screen. While the iPod screen is capable of a similar level of detail, the PSP’s widescreen format makes it infinitely more capable of entire movie playback. Here’s hoping that Sony’s initial price structure is better than the UMDs was at launch, because if I had a PSP, i’d definitely be interested in this functionality.

Deejay Knight, Editor/Founder Deejay has been a gamer since the Atari 2600, has wrestled–and defeated–alligators with only his toes, and once aligned all the planets in the Solar System by uttering the words "Coo Coo Ka-Choo". In his sleep. He currently bides his time behind the scenes here at GAMINGtruth.com, streaming at http://www.twitch.tv/deejayknight and teaching.